Marriage: A Dinner Menu in Reverse

A sermon by MATTHIAS PANKAU


Grace, peace and mercy to you from God our Father, and the Lord Jesus Christ.

Germans sometimes use a culinary metaphor for marriage, describing it as a dinner menu in reverse.
The menu starts out as sweet as dessert. Then follows an enticing cheesy part occasionally culminating in the seven-year itch; add a fresh green salad for digestibility. Next you have the long and substantial, but hopefully delicious, main course, the very body of any good dinner as of the marital union. The subsequent fish course should be lighter, but can be fraught with the danger of lethal bones. If all goes well, though, this bill of fare will culminate in the cheerfulness of subtle hors d’oeuvres, when after mastering decades of temptation and strife, the couple is rewarded with the facility to go to bed at night with a loving smile, and to wake up in the morning still holding hands.

From what you have told me, dear Gillian and Uwe, this last menu item is the delight of your life together today. But as for the preceding dishes – boy, did the chef foul up! Or so it seems!

The sweetness of dessert was spoiled when the Cuban Missile Crisis of 1962 forced you to cancel your wedding in London. Unwed, you rushed to Uwe’s new posting in New York, where you were joined in holy matrimony exactly 50 years ago today in Immanuel Lutheran Church by a drunken pastor who almost missed this appointment.

There was no chance of the cheesy part of the seven-year itch to evolve because Uwe’s assignment to the Vietnam War separated the two of you for up to eight months per year and included the tragedy of the loss of your child due to a tubular pregnancy.

The fish course should have been more digestible, but it included deadly bones that could have killed off the strongest marriage: I am referring to the loss of all your wealth, including your château next to this lovely old church, in a Lloyd’s of London scam.

Moreover, dear Gillian, finding yourself in the role of a lowly seminarian’s wife and suffering five years of hardship until Uwe completed his doctorate in theology at the age of 55 surely could not have corresponded to the life of glamour you were promised when you married this dashing foreign correspondent half a century ago.

And yet, here you are, still together, a loving couple, blended inseparably like Cabernet Sauvignon and Merlot in a mellow Bordeaux wine and surrounded by faithful friends from all over the world. The outsider marvels: how is this possible after all the two of you have been through?

Dear Uwe: I have often heard you describe yourself as a radical sinner in radical need of the radical Gospel of Christ. You told me of your and Gillian’s deep conviction that He never left your side even in times of tribulations of a magnitude that made many others take their own lives.

What we are celebrating here today in awe is none other than a clearly discernible act of divine grace, the grace to which you owe Gillian’s enduring love and forgiveness. It was by grace, you keep saying, that you received this gift, not your own doing, and it is out of gratitude for this unfathomable gift of grace that you and Gillian have invited us to celebrate with you today.

Dear Gillian: I know how much you reciprocate Uwe’s conviction. We love you for that most of all. In the last 50 years you have confirmed the Apostle Paul’s words about Christian love in his First Letter to the Corinthians:

This is your enormously powerful message to an increasingly darkening world where enduring love and faith are no longer the norm. I pray that the two of you will have many years together in this light-hearted hors d’oeuvres phase of your marriage to encourage the rest of us with your heart-warming example. Thank you, dear Gillian and Uwe! And thanks be to God!

And may our almighty and merciful God, Father, Son and Holy Spirit, bless you and keep you. Amen!

Rev. Matthias Pankau is an editor of IDEA, a Protestant publishing house in Germany, and an ordained, unpaid pastor of the Evangelical-Lutheran Church of Saxony 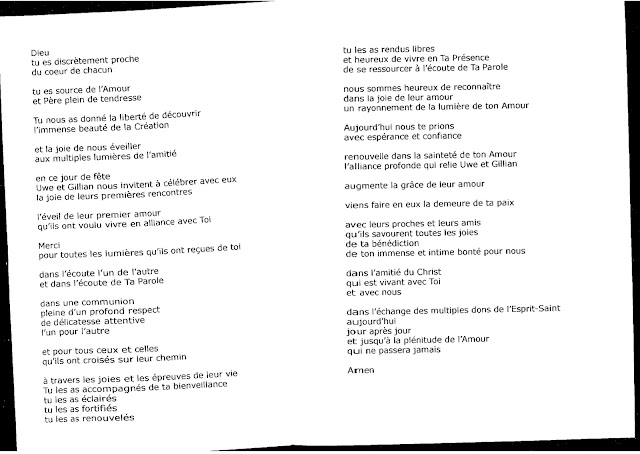 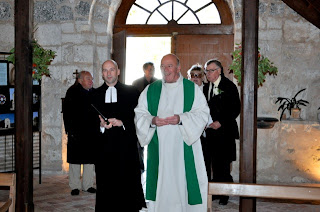 Father Bruno Fèvre (r) is the Catholic pastor  of Montmoreau, France.
His huge parish includes Gurat and 71 other towns and villages.